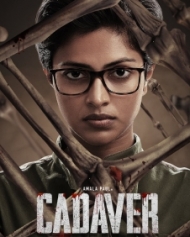 Thriller
Release Date : 12 Aug 2022
Cast : Amala Paul, Riythvika
Director : Anoop Panicker
Synopsis
Cadaver is a Tamil forensic investigative thriller movie directed and scripted by Anoop Panicker and Abhilash Pillai, the movie produced by Amala Paul, she also plays the role of Dr. Bhadra, who is the chief police surgeon in Tamil Nadu. The star cast includes Riythvika, Harish Uthaman, Athulya Ravi, Adith Arun, and Ramdoss in the supporting roles.
Story
The story of Megan Reed, a recovering alcoholic and ex-cop who has been out of rehab for a while. As she takes up the graveyard shift, a series of bizarre events are caused by one of the corpses in the morgue.
The movie Cadaver releasing in Disney Plus Hotstar on August 12, 2022.