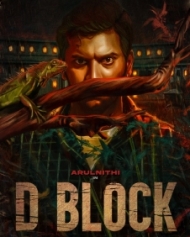 D Block is a Tamil action thriller movie written and directed by debutant Vijay Kumar Rajendran. The movie stars Arulnithi and Avantika Mishra in the lead roles with a supporting cast including Karu Palaniappan, Charandeep, Thalaivasal Vijay, Ramesh Khanna and Uma Riyaz Khan. D Block produced by cinematographer Aravinnd Singh under the banner MNM Films and presented by Sakthi Film Factory. The songs were composed by Ron Ethan Yohann and Kaushik Krish while the latter did the film score.
Director Vijay Kumar Rajendran is an famous youtuber and actor with the channel "Eruma Saani".
The movie is scheduled for release in theatres on 1 July 2022.