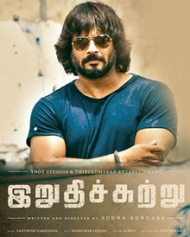 Irudhi Suttru / Iruthi Suttru is a bilingual sports drama movie written and directed by Sudha Kongara Prasad. The film features R. Madhavan in the leading role as a boxing coach, and is being simultaneously made in Tamil and Hindi, under the title Saala Khadoos.
Irudhi Suttru Story
Prabhu Selvaraj (Madhavan) is a banished boxing coach who tries hard to prove his critics a point. Carrying with him a hope that our country too, can achieve big in the field of boxing, he begins a new journey.
Impressed with the attitude of a young fisher woman Madhu, played by Ritika Singh, Prabhu decides to make her his disciple by coaching and paying her 500 rupees, per day.
The rest of the film narrates the journey of these two distinctive characters and of course, whether Prabhu realizes his dream is something you have to check out in a cinema hall.
Production
Both versions are produced by C. V. Kumar and S. Sashikanth for Thirukumaran Entertainment and Y NOT Studios, while Varun Manian's Radiance Media presents the Tamil version and Madhavan's Tricolour Films and Rajkumar Hirani present the Hindi version respectively.
The movie music composed by Santhosh Narayanan, the film has cinematography by Sivakumar Vijayan and editing by Praveen.