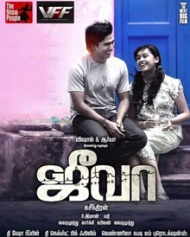 Jeeva is an upcoming Indian Tamil film co-written and directed by Suseenthiran, who also produces the film along with cinematographer R. Madhi and art director Rajeevan under the banner of Vennila Kabadi Team.
The movie features Vishnu and Sri Divya in the lead cast. Its music is composed by D. Imman, cinematography is handled by R. Madhi and editing by Anthony, while dialogue was written by Santhosh.
Story
The Jeeva movie story is about the cricketer and with cricket as the heart of the movie, the movie revolves around friendship, sentiment, love, pain and a lot of cricketing.
Jeeva (Vishnu) the real life cricketer is the hero of this movie, plays the role of a middle class guy who has full of interest in cricket. During his schoolings he meets Sri Divya, who is new to his colony. Both fall in love with each other. One certain time both parents comes to know about their love and they were getting separated.
Vishnu goes too sad and his father wants to divert his attention to cricket, then he joins him in a local cricket club. He forgot about his love and he shows his full talent in cricket. Then he got selected in Ranji Trophy.
Then a petty political play in the sport form in Jeeva's (Vishnu) life, how he faced that forms and did he succeed in his love are the rest to be watched in full screen.