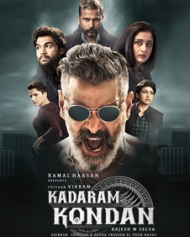 The core plot of Kadaram Kondan revolves around a mysterious person named Mr KK. At the same time, a trainee doctor named Vasu gets entangled in an issue when his wife gets kidnapped by a group and they place a demand in front of the young doctor.

The first look poster of the movie and title were released on November 6, 2018.