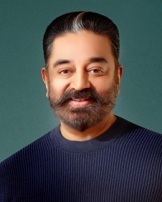 Kamal Haasan aka Kamal Hassan, well known as Universal Hero by the fans, a Tamilian by birth, is an Indian film actor and director, considered among the leading method actors of Tamil cinema. Hassan is known for winning several Indian film awards, including National Film Awards and Filmfare Awards, and has the distinction of being the actor with the most films submitted by India in the contest for the Academy Award for Best Foreign Language Film. In addition to acting and directing, he is a screenwriter, lyricist, playback singer, and choreographer. His film production company, Rajkamal International, has produced several of his films.

Kamal Haasan's breakthrough into lead acting came with his role in the 1975 drama Apoorva Raagangal, in which he played a rebellious youth in love with an older woman. He secured his first Indian National Film Award for his portrayal of a guileless school teacher who tends to be a childlike amnesiac in 1982's Moondram Pirai. He was particularly noted for his performance in Mani Ratnam's Godfatheresque Nayagan (1987), which was ranked by Time magazine as one of the 100 best films of all time.

Early Career
Kamal Haasan made his film debut as a 6-year-old child artist, in the 1960 film, Kalathur Kannamma, directed by A. Bhimsingh. He was cast along with the veteran Tamil actor Gemini Ganesan in the film, which won him the National Film Award for Best Child Artist. He acted as a child actor in five other Tamil films in the subsequent few years, co-starring with popular actors of the era, including Sivaji Ganesan and M. G. Ramachandran.

Classic Period
Kamal Haasan first received a regional Filmfare Award for acting for his role in the Malayalam film Kanyakumari (1974). In the next four years, he won six regional Best Actor Filmfare Awards, including four consecutive Best Tamil Actor Awards. After a series of less-successful films, he acted in director K. Balachander's Apoorva Raagangal, an exploration of age-gap relationships; the film is also known for introducing another prominent Tamil actor, Rajinikanth.

Following his increased prominence in the latter half of the 1970s, Haasan was considered a major Tamil film star at the turn of the decade. His popular pairing with the actress Sridevi continued with Guru and Varumayin Niram Sigappu in 1980.

Both films were blockbuster successes for these actors. Kamal Haasan also made guest/cameo appearances, such as in the Rajinikanth film Thillu Mullu; Rajinikanth had previously appeared in some of Kamal Haasan's previous films.

Haasan's 100th career film appearance was in 1981's Raja Paarvai, which also marked his debut in film production. Despite this film's relatively poor reception at the cinemas, his portrayal of a blind session violinist earned him a Filmfare Award. His next acting role in Ek Duuje Ke Liye, became his first Hindi-language film.

Following a two-year hiatus in Indian cinema, Haasan opted against reviving his magnum opus, Marudhanayagam, and filmed his second directorial venture, Hey Ram, a period drama told in flashback with a semi-fictional plot centering around India's Partition and the assassination of Mahatma Gandhi.

Marriage
He married actresses Vani Ganapathi first and later Sarika who bore him two children: Akshara Haasan and Shruthi Haasan. He divorced her and started living in with Gauthami, another famous Indian film actress of yesteryears. They were separated in 2016 from their live-in relationship.

Kamal Haasan formally launched his political party, Makkal Needhi Maiam, on February 21, 2018. The party's flag displays six joined hands in a circle in alternate red and white colours with a white star at its center on a black background.