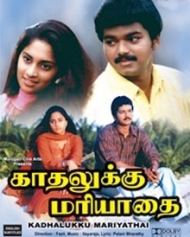 Kadhalukku Mariyadhai is a Tamil romantic musical movie directed by Fazil. It starred Shalini and Vijay in the lead roles with Sivakumar, Srividya and Manivannan playing other supporting roles.
The film was a remake of Fazil's successful Malayalam film, Aniathipravu, which featured Kunchacko Boban and Shalini in the lead roles.