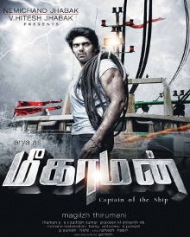 Meagamann is an Tamil action drama film directed by Magizh Thirumeni and produced by Hitesh Jabak. The film features Arya, Ramana and Hansika Motwani in the leading roles, while Thaman composes the film's music.
Story
Meagamann runs in the backdrop of Goa. Jothi Bhai is one of the drugs dealing leader in Goa and a young drug cartel employee Shiva played by Arya and Chandra played by Ramana plays undercover cops in this film. They are part of an undercover operation to bring down the drug mafia.
Jothi Bhai maintains a low profile to escape from the law and also controls each and everything without showing his face. Vasu and Bharthi, two senior and high profile cops plan a secret mission to arrest Jothi Bhai and his J Company. They have an undercover police officer in Jothi Bhai gang for more than 4 years, but can’t able to trace him.
Hansika plays as Arya's neighbor named Usha (Hansika Motwani), a software engineer. Hansika starts romancing with Arya. The two undercover cops became the part of the mafia group and they earn the trust of two different gangs. But one day, the mafia group notices the real fact. The mafia groups know the truth of Shiva and Chandra.
What happens to Shiva and Chandra? What Mafia groups will do? Will undercover cops survive? The rest of the story to be watched on big screen.