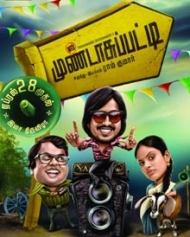 Mundasupatti is a Tamil comedy film direction by debut  D Ram and produced by Fox Star Studios & Thirukumaran Entertainment. The movie, starring Vishnu and Nandita in lead roles.
Story
The movie story is about the village "Mundasupatti" which happens at 1947. Village people were affraid of photo camera and they belive that if people takes photo, they may die so they used to take photos only after their death.
Cut to story’s present, which happens in 1982, Gopi (Vishnu Vishal) and his sidekick (Kaali Venkat) run a photo studio, which is named as ‘Hollywood Studio’. They happen to travel to Mundasupatti on work, but get tangled in a problem.
Mean time a Zamindar(Anandaraj) wants to take away the meteoroid from the village as the archaeologist’s  family member offers him  huge ransom. However, Gopi’s love for Kalaivani (Nandita), makes them stay there. Will Gopi and Kalaivani unite?
Vishnu plays photographer role & lives in town, he falls in love with Nandita, kaali Venkat plays assistant for Vishnu. This movie is featured from the Short Film "Mundasupatti" from Naalaiya Iyakkunar.