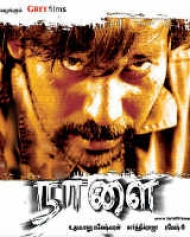 Action Romance
Release Date : 17 May 2006
Cast : Richard, Kadhal Dhandapani
Director : Udhayabanu Mageswaran
Synopsis
Naalai movie revolves around two orphans Justin (Richard) and Nattu (Natraj) who are work as henchmen to Nair (Nasser). They are his loyal servants and  both are prepared to lay their lives for their master.

However a sequence  of events results in Nair developing mistrust and hatred on the two. He  employs another youth in their place and plans to bump them off.

Eventually Justin ends up in prison and Nattu loses his leg thanks to Nair's plans . After three years (when Justin completes his jail term ), Justin along with Nattu decides to stay away from violence and lead a peaceful life

Charu (Madhumitha) who is a girl next door falls in love with Justin and both decide to marry. Meanwhile a reformed Nair seeks appology to both Nattu and...