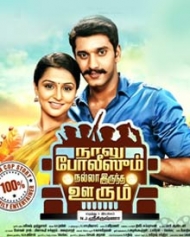 Naalu Policeum Nalla Irundha Oorum (aka) 4 Policeum Nalla Irundha Oorum is a Tamil comedy movie written and directed by Srikrishna. The film features Arulnithi and Remya Nambeesan in the leading roles.
Story
As the title suggests, the movie revolves around four Policemen in a village that hardly requires the service of the police department. Such is the tranquility this village is blessed with.
When there are absolutely no threats to the serenity of a particular place, quite naturally, policemen guarding that place will have to kill time by other means and that's exactly what is narrated in this flick with a touch of comedy.
When everything seems to be peaceful for the central characters, their superiors decide to shut down the police station allotted to them saying that a place doesn't require a police station if it doesn't function as expected.
With their department's abrupt decision, the 4 policemen go into a depression mode. But with no intentions of giving up easily, they decide to spring into action.
What do they do to retain their position without having to get transferred to a new place? Will their village get its lost police station? These questions are answered in the rest of the film.