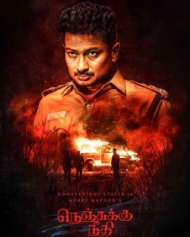 Nenjuku Needhi is a Tamil remake of the 2019 Hindi movie Article 15, a crime drama movie. The movie Nenjuku Needhi is directed by Arunraja Kamaraj and produced by Boney Kapoor. The movie stars cast includes Udhayanidhi Stalin, Tanya Ravichandran, Aari Arujunan and Shivani Rajsekhar. Udhayanidhi Stalin plays the lead role of Vijayaraghavan IPS originally done by Ayushman Khurrana in Hindi version. The title Nenjuku Needhi, named after the autobiography of Udhayanidhi's grandfather M. Karunanidhi, was announced on 16 October 2021.
Story
The movie Nenjuku Needh is based on Article 15 of the Indian Constitution. The movie is inspired from true events. The film offers a realistic take on Article 15 of the Indian Constitution, which prohibits discrimination on grounds of religion, race, caste, sex or place of birth. In the movie, Udhayanidhi plays a role of police officer investigating the gang rape and murder of a woman, who belongs to a minority class, in rural Tamil Nadu.
Release
The movie shoot began in April 2021 and wrapped that December. The movie trailer released on 9th April 2022. Nenjuku Needhi is scheduled to release on 20 May 2022. The film's distribution rights in Tamil Nadu are held by Red Giant Movies.