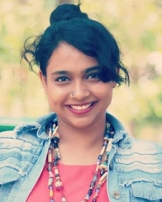 Ananya Bhat is an Indian playback singer who primarily works in Kannada cinema. Through her successful singing career, she is the recipient of Filmfare Award for the song 'Namma kaayo devane', of the film Rama Rama Re at 64th Filmfare Awards South, 2017. Ananya born in Ankali, Belagavi, she was raised in Mysuru, Karnataka. She is currently residing in Bengaluru.

Bhat is the singer in songs Garbadhi (solo), Sidila Bharava, Dheera Dheera and Koti Kanasugalu, of the multi-lingual film KGF. She has recorded songs in all five South-Indian languages. Previously she worked for a playback "Namma Kaayo Devane" in Rama Rama Re (2017) for which her voice was critically acclaimed and won numerous awards. In 2018 she rendered her voice for "Hold on" & "Mental ho jawa" songs in Tagaru which later became most popular kannada songs of the year.