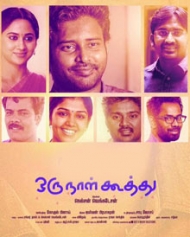 Oru Naal Koothu (aka) Oru Naal Kuthu movie is a Tamil comedy - romance genre direction by debut Nelson Venkatasan. The movie has Attakathi Dinesh and Amarakaaviyam fame, Mia George in lead roles.
Oru Naal Koothu Plot:
Oru Naal Koothu is a light-hearted entertainer that talks about the dilemma that springs up when it comes to marriage. What works in favour of the movie is that it targets contemporary youngsters.
Dinesh and Nivetha Pethuraj play IT professionals and are in love with each other. What keeps Dinesh from tying the knot with his girlfriend is his family. He aspires to secure his family's future before starting his own.
Riythvika, a 28-year-old RJ, is finding it difficult to find a suitable groom and her elder brother, played by Karunakaran, wants to marry off his sister before starting his own marriage life.
Mia George's father on the other hand, wants to marry his daughter off to a wealthy person. Narrated from 3 different perspectives, Oru Naal Koothu is about what happens in the lives of these mentioned characters at the time of their respective weddings.
Production
The production house agreed to finance the film, after gaining profits while working on Dinesh's previous film, Thirudan Police (2014). The film began production in March 2015 in Dindigul, where scenes involving Mia George were shot. Nivetha Pethuraj, a former beauty contestant winner from UAE, was selected to portray another leading female role in the film.
Soundtrack
Music and soundtracks were composed by Pannaiyarum Padminiyum fame Justin Prabhakaran . The soundtrack features five songs, the lyrics for which are written by Madhan Karky ,Vivek,Veera,Sankar Dass and Gopalakrishna Bharathi.