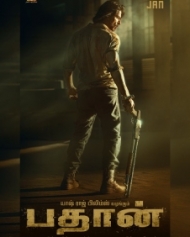 Pathaan is an action-crime movie directed by Siddharth Anand. The film's story, screenplay, and dialogue were penned by Siddharth Anand, Shridhar Raghavan, and Abbas Tyrewala. The movie stars Shahrukh Khan, Deepika Padukone, and John Abraham in the main lead roles, along with Dimple Kapadia, Siddhant Ghegadmal, and many others in supporting roles.

The film's editing was done by Aarif Sheikh, and Satchith Paulose handled the cinematography. The music and background music for the movie were created by Vishal Dadlani and Shekhar Ravjiani. Under the banner of Yash Raj Films, Aditya Chopra and Alexander Dostal produced this movie.

Pathaan depicts the plot of an Indian spy confronting the commander of a group of soldiers with sinister plans to attack his motherland, much like an action criminal thriller movie moves with full powerpacked screenplay.

The Pathaan movie was released in theatres on January 25, 2023.