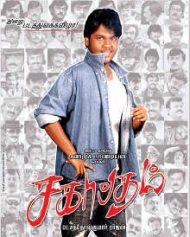 Sagaptham (aka) Sahaptham is a Tamil action movie directed by Surendran and produced by L. K. Sudhish. The film features newcomer Shanmugapandian, Neha Hinge and Shubra Aiyappa in the leading roles.
Vijayakanth initially considered remaking the Telugu film, Brindavanam (2010) as well other projects directed by K. S. Ravikumar and Hari, but later opted for an original script written by Naveen, with dialogues by Velumani.
By the end of 2012, it was finalized that Vijayakanth's brother-in-law L. K. Sudhish would be the film's producer and newcomer Santhoshkumar Rajan, would be directing.  The film was launched on 12 December 2013 at Aandal Azhagar Illam in Saligramam, Chennai with several of Vijayakanth's contemporaries in attendance. Early reports speculated that actor Vijay and Vijayakanth himself, would play the guest roles, but speculation was denied.
The soundtrack is composed by Karthik Raja. Silambarasan, Andrea Jeremiah and Remya Nambeesan recorded a song for the film, which had lyrics written by Parthy Bhaskar.
The satellite rights of the film were sold to Captain TV.