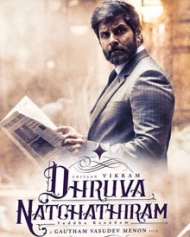 Dhruva Natchathiram is a Tamil action - thriller movie, directed by Gautham Menon. The cast of Dhruva Natchathiram includes Vikram and Ritu Varma in the lead role (Full Cast & Crew Details)
Pellichoopulu fame actress Rithu makes her debut in Tamil with this movie. She has replaced Anu Emmanuel who has opted out of the project due to date issues.
The title logo of Dhruva Natchathiram was released on Jan 8th, 2017.  Also the tean is planning to release the movie on August 11th for Independence Day long weekend.
Dhruva Natchathiram is said to be a spy thriller on the lines of the Bourne movies and will be primarily shot in the US. The movie is jointly produced by Ondraga Entertainment and Escape Artists Motion Pictures.
Dhruva Natchathiram teaser was released on Jan 14, 2017. Teaser was 2-minute 38-second clip follows the story of John played by Vikram, an undercover agent based in New York. He and his team are involved in a secret operation that is headed by a man named Mr K. John and his team spring into action when the bad guys catch hold of Mr K, leaving them in the dark.
View: First Look Poster Of Dhruva Natchathiram