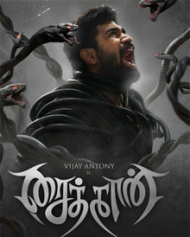 Saithan (aka) Shaitan is a Tamil thriller movie direction by Pradeep Krishnamurthy and produced by Lyca Productions. The film features Vijay Antony, Arundhati Nair and Alisha Abdullah in the lead roles.
Saithan Story In Detailed
Dinesh(Vijay Anthony) is a successful software engineer who has huge knowledge in trouble shooting with all the leads a big data and algorithmic challenges handled by him and his boss.
Dinesh marries a simple homemaker Aiswarya (Arundhati Nayar) and makes the life happy. Just after his marriage Dinesh starts hearing weird voices from his brain which ask him to kill himself.
The experience gets peculiar and even extraordinary which frustrates Dinesh and flips around his reality.
The circumstance lands him to specialist doctor. What is that issue ? What does it need to do with Dinesh's present life? what's more, How does Dinesh figures out how to leave this precarious circumstance ? Is rest of the story to be viewed on wide screen.
View: Interesting Photos From Saithan
The film began production during March 2015 and was completed in November 2015.Predominantly shot around Chennai, the film featured actress Arundhati Nair in the leading female role. The film was revealed to be in the post-production stages during February 2016, Saithan audio launched on Nov 3rd and movie scheduled to release on Dec 1, 2016.
The movie is releasing in over 1350 screens worldwide, confirmed Fatima Vijay Antony in her tweets.
Bethaludu Telugu dubbed version of Saithan is releasing in 500 screens in Andhra Pradesh and Telungana, this happens due to his previous movie Pichaikaran's success.