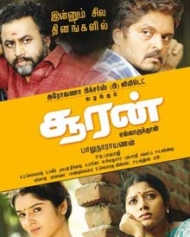 Sooran is an Tamil action movie direction by Balu. The movie has Karan, Manivannan, Ponvannan, Ayan Jagan among others. Produced by Arowana Pictures Private Limited, Sooran is directed by Balu Narayanan, a former associate of director G Kicha.
Speaking about the movie, the director says, ‘There is bravery inside every man. Opportunities and situations bring out the best in him. Sooran is about one such individual who does the impossible’.
The movie has songs tuned by newcomer P V Balaji. The movie was shot in Pollachi, Gobichettipalayam and Chennai.