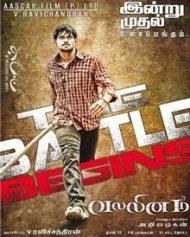 Vallinam tamil movie is the story about a basket player, the movie deals with the travails in the life of a sports person. Boys Nakul plays the male lead role and pair with New face Mridula plays the female lead role & movie will be directed by Eeram fame Arivazhagan.
Story
The movie opens with an interesting conversation between Krishna (Nakul) and Shiva (Kreshna-cameo)  who are best buddies in Trichy and Shiva is the main reason for cultivating a strong basketball passion to Krishna.
During an inter college basketball match, Shiva meets with an accident and passes away. In order to overcome Shiva’s death, Krishna (Nakul) gets himself a transfer to Chennai national college and also decides not to play basketball any more.
Nakul develops friendship with Guna who is incidentally a basketball player and just  like his old coach’s (actor Aadhi, another cameo) saying, despite rejection any thing which is truly loved will come back to us some day and  the situation forces Nakul to play the game for a good cause.
Also Nakul’s new college is highly obsessed with cricket and it doesn't have any proper basketball team, the remaining story tells about how Nakul and his basketball team proving the pride of their game in Chennai city and also proves a point to Nakul’s villainy senior who is their college’s cricket team captain.