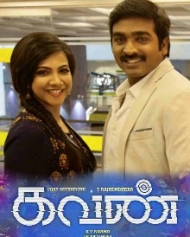 Kavan is a Tamil action, social thriller movie direction by Ayyan & Ko fame director KV Anand. The movie has Vijay Sethupathi, T Rajendar and Premam fame Madona Sebastian in the lead roles.
The movie also has Vikranth, bose Venkat, Pandiarajan, Jagan and Akashdeep Saighal in pivotal roles. Actor Akashdeep Saigal who acted as the lead villain in Anand's 2009 super hit 'Ayan' makes a comeback in Kollywood playing the antagonist in this film.
The story for 'Kavan' has been written by Anand, writers Suba and Kabilan Vairamuthu. The director in his interview revealed that Vijay Sethupathi plays a Chennai based corporate employee while TR is an agent for corporate companies. The combination scenes between these two extremely talented actors will be a tremendous treat for the audience.
The soundtrack album was composed by Hiphop Tamizha making his first collaboration with K. V. Anand.
Regarding the decision to choose this title, Anand said, "We chose 'Kavan', which means 'catapult', because it perfectly suits the story line, which involves a hero aiming for his target, and also sounded good."
View: Interesting Photos From Kavan