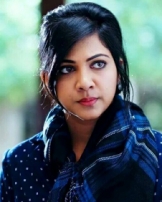 Madonna Sebastian is a well-known actress and singer who works in the Malayalam, Telugu, and Tamil film industries. She is best known for her performances in the films like Premam, Kadhalum, Kadandhu Pogum, Iblis, Virus, Vaanam Koottatum, and Shyam Singha Roy.

Madonna Sebastian was born into Christian Family at Cherupuzha in Kannur. After completing her school, she pursued her graduation in Bachelor of Commerce from Christ University, Bangalore.

Madonna Sebastian forayed into the film industry by anchoring a music reality TV show in the Malayalam Language. After seeing her brilliant work in the program, acclaimed director Alphonse Puthren called her for an audition for his next project Premam. She attended the audition and got selected in the final round. Later, In 2015, she made her first debut in Malayalam with the romantic-comedy drama Premam, which starred Nivin Pauly, Sai Pallavi, and Anupama Parameswaran in the lead roles. The film was a full package of humor, seriousness, and twists that led to the best performance of actors in the industry. It became a big hit and highest grossing Malayalam film of that year. In 2016, the actress was nominated for the Best Female Debutante at the SIIMA Award.

After then, she acted in a Tamil film Kadhalum Kadandhu Pogum along with Vijay Vijay Sethupathi directed by Nalan Kumarasamy. The film was her first debut in Tamil Industry, it became an average hit movie. In the same year, she made her debut in Telugu with the film Telugu remake of Premam. Since then she acted in commercial success films such as Kavan, Power Paandi, Junga, and Iblis.

In 2019, she appeared in Aashiq Abu's film Virus. The film was based on the deadly virus Nipah outbreak in Kerala. It was successful and won the Best Indian Feature Film Award at Jagran Film Festival in Mumbai. The actress next worked with Prithviraj Sukumaran in the film Brother's Day. The film starred Prithviraj, Prayaga Rose Martin, Miya George, and Aishwarya Lekshmi in the lead roles. It marked the directorial debut of actor Kalabhavan Shajohn, who appeared in a lead role in Prithviraj's directorial debut, Lucifer. Like a family entertainer, the film was a commercial hit at the box office.

Apart from acting in Malayalam, Tamil, and Telugu industries, she made her debut in Kannada in 2020 with the action-thriller film Kottigobba 3, in which she played a lead role opposite Sudeep. The film received average reviews from the audience. After then, the actress appeared in the film Shyam Singha Roy, directed by Rahul Sankrityan of Taxiwaala fame. It starred Nani, Sai Pallavi, and Krithi Shetty in the lead roles. The film was well-received and collected Rs 50 crore at the box office collection. The actress was last seen in the movie Kombu Vatcga Singamda, directed by Shiva Karthik which was released in 2022. The film was a box office bomb.

Other than acting the actress is known as a playback singer in the industry. She started training in Carnatic as well as western since her childhood. She sang songs for Malayalam films such as You Too Brutus and Valleem Thetti Pulleem Thetti. And also hosted various TV music programs in the Malayalam Language.

In 2017, she was nominated for the Best Actor Category for the film Kadhalum Kadandhu Pogum at Behindwoods Golden Medal Award Function. And won Ananda Vikatan Cinema Awards for Best Debut Actress Category for the same film.