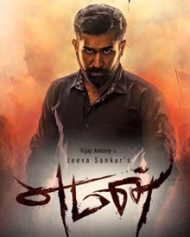 Yeman (aka) Yaman is a Tamil action thriller movie directed by Jeeva Shankar and produced by Subashakaran under the banner Lyca Productions. The film features Vijay Antony and Miya George in the lead roles. Veteran actor Thiyagarajan is acting as the lead villain in this film.
Story
Vijay Antony plays Tamilarasan, an ordinary man, seeking money to save his cancer afflicted grandfather (Sangili Murugan), agrees to go to jail by accepting to take the blame for a drunken and drive accident.
He get into jail, he meets with the first connection to a political web and from there he starts his political journey. Mia George plays female lead role as a film actress in the movie. The rest of the movie story tells about Tamilarasan's political journey.
Vijay Antony has teamed up again with Jeeva Shankar the director and cinematographer of the 2012 thriller flick 'Naan' which launched him as a hero.
Vijay Antony composes music for the film while Jeeva Shankar has taking care of cinematography as well as direction.