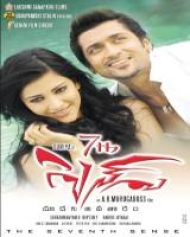 U | Action Thriller
Release Date : 26 Oct 2011
Cast : Suriya Sivakumar, Shruti Haasan
Director : A.R. Murugadoss
Synopsis
7th Sense movie is dubbed version of Tamil movie "7am Arivu" and it is based on the theme of time traveling and the movie revolves around a Time Machine. This time machine is invented by Shruti Hassan as she plays the role of a scientist in the movie.

Her invention of time machine unveils the hidden truths including the Telugu culture and its ancient connection with the Chinese tradition. As the bad guys try to steal this invention but are stopped by Surya who will be playing three different roles in this movie one is scientist and another two are an aggressive monk and a circus stunt artist.