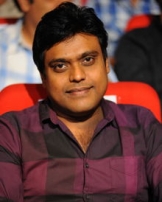 Harris Jayaraj is a Tamil film composer. He has written scores and soundtracks and played music for many Tamil films, as well as Telugu and Hindi films. He lives in Chennai, Tamil Nadu, India. Over a period of seven years, Jayaraj has established himself as one of the leading composers of Chennai film music in South India.

Harris Jayaraj was born into a pious Tamil Christian Nadar family in Chennai, Tamil Nadu . He studied at the Krishnasamy Matric School, Chennai, and later obtained a music degree in Trinity College of Music, London, England. His father, S.M. Jayakumar, is a film guitarist who later became a noted musician and Chennai film composer. Jayaraj was an early admirer of the work of Hans Zimmer, percussionist Aruljothi Balagopal, A. R. Rahman and predecessor M. S. Viswanathan.

Harris Jayaraj entered the world of film music as a musician, programming scores and drum–percussion for films under the famous Tamil music director A. R. Rahman. Jayaraj began his career as a keyboardist for several music directors over twelve years, including Rahman, Manisharma Vidyasagar and Karthik Raja, in addition to composing beats for TV advertisements.

His first music score for a commercial film was for the Tamil film Minnale. The music was well received, particularly the song "Vaseegara", which made the film a box office hit, running the charts for weeks. After Minnale, Harris composed music for the Tamil movies 12B and Kovil, which met with high acclaim. His score for Minnale was later dubbed.

In 2005, he composed for movies like S. Shankar's Anniyan, A. R. Murugadoss's Ghajini (2005) and Thotti Jaya. The song "Andangkaaka" in Anniyan reached all classes of people and was the major hit song of that year and of course in his career.

Jayaraj's collaborations with director Gautham Menon have been widely acclaimed, both of them being very successful in Tamil film industry. They have worked together in a series of hit movies like Minnale, Kaaka Kaaka (2003), Vettaiyaadu Vilaiyaadu (2006), Pachaikili Muthucharam (2007) and Varanam Aayiram.

On 13th November 2008, just before the release of Varanam Aayiram the duo split. Without divulging any reasons for their break-up, Harris Jayaraj said, “we are forced to take the decision. There is no ill-feeling between us. I wish him all the best in all his future endeavors”.

Later, he scored music for Orange (Telugu) and it is the only movie which released for him in 2010.