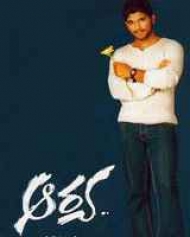 Ajay (Siva Balaji) is a spoiled brat, and is the son of local MP Avataram (Rajan P Dev). He loves Geeta (Anuradha Mehta) and proposes to her. When she refuses, he threatens to jump from the college roof. Being a meek girl, Geeta accepts the proposal and starts dating him.

Arya (Allu Arjun) is a carefree guy with positive attitude. He falls in love with Geeta at...