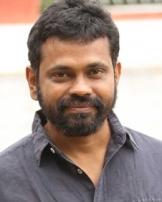 Sukumar is an Indian film director, producer, and screenwriter who predominantly works in Telugu cinema. Sukumar made his directorial debut with Arya in 2004; its success catapulted him to stardom.

Sukumar was born in Mattaparru, near Razole, in the East Godavari district of Andhra Pradesh. He worked as a mathematics and physics lecturer at the Aditya Junior College, Kakinada, for nearly six years before pursuing a career in films. He began working as a writer and assisted Mohan and V. V. Vinayak.

Sukumar is known for his complex, multi-layered screenplays, which earned him the reputation of being an intelligent screenwriter. He is also known for infusing grey shades into the character sketches of his protagonists.

Under the banner of Sukumar Writings, he made his debut as a film producer with Kumari 21F (2015), whose story and screenplay were penned by him. He received the K. V. Reddy Memorial Award for his contributions to Telugu cinema in 2014.