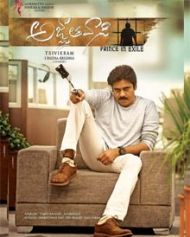 Pawan Kalyan's 25th movie PSPK25 titled as Agnathavaasi, it is a romantic action entertainer written and directed by Trivikram Srinivas and produced by S Radha Krishna under Haarika and Haasine creations banner while Anirudh Ravichander scored music for this movie

The movie starts with the deaths of a father-son duo in two separate incidents which uncover them as top brass industrialists, Govinda Bhargav (Boman Irani) and Mohan Bhargav of AB groups. Indrani Bhargav (Khushbu Sundar) seeks assistance from the protagonist (Pawan Kalyan) who would step into the AB groups as Balasubramaniam, a supposed personal assistant to one of the board directors (Murali Sharma).

The movie runs on how Balasubramaniam discovers the motive and people behind the suspicious murders of the Bhargav duo with Indrani's assistance.

Who is Balasubramaniam in real? What connection would he have with the Bhargavs? Who and what are the reasons for the execution of Bhargav duo? What does AB stand for, forms the rest of the movie.

All these questions gets answered at a staged level in the movie.