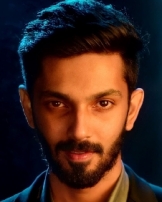 Anirudh Ravichander is a music composer and singer. He is the son of actor Ravi Raghavendra. His mother, Lakshmi, is a dancer. Anirudh was a part of a band in school called Zinx. At the age of 10, he started composing music.

He did his schooling at Padma Seshadri Bala Bhavan, one of the most prestigious educational institutions in Chennai. He graduated from Loyola College, Chennai, in 2011, which according to him was just a back-up plan in case his music career did not take off. Anirudh learned classical piano at the Trinity College of Music, London. He also learned Carnatic music and was part of a Carnatic fusion band.

He made his music-directing debut for the Aishwarya Dhanush-directed Tamil film 3, titled 3. A. R. Rahman's music has served as an inspiration for him. He is Latha Rajinikanth's nephew. Anirudh composed the promotional song "Why This Kolaveri Di" for the Tamil movie 3, and it quickly became popular online, with over 65 million views and YouTube views for the kolaveri music are still increasing.

Vanakkam Chennai, Anirudh's debut soundtrack, debuted at the top of the Album category on iTunes India within a few days of its release. He then composed and sang a song for David (Kanavey Kanavey), and the audience enjoyed his background music for the movie.

Velaiyilla Pattathari, his subsequent album, received favourable reviews from critics. The album topped the iTunes India Charts and earned favourable reviews from critics. He once again worked on Kaaki Sattai with his close friend Sivakarthikeyan, to whom he already gave the energising hit albums Ethir Neechal and Maan Karate. It ultimately rose to prominence as one of Tamil cinema's most successful compositions during that period of time.

Another collaboration with Dhanush was Maari, for which Anirudh provided the musical score. Critics praised his performance in the Vijay Sethupathi film Naanum Rowdydhaan.On Valentine's Day in 2015, he released a song from the film Aakko (Enakena Yaarum Illaiye).

And as a result of providing the best music and background score for all of the films, he became an unavoidable music director for Tamil films and later he also emerged in Tollywood industries.