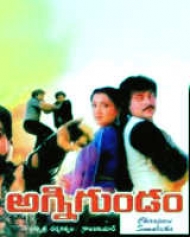 U | Action Drama
Release Date : 23 Nov 1984
Cast : Chiranjeevi, Sumalatha
Director : Kranthi Kumar
Synopsis
Agni Gundam is action drama based movie in which, Vijay (Chiranjeevi), who is a sincere worker in a factory. He tries to expose the reality of few anti social elements as a part of his mission to stand for justice.
Few big wigs like Satyam are worried about vijay’s activities and plan to destroy him.
Meanwhile, Vijay falls in love with latha (sumalatha), but satyam manages to get latha married to his brother chinna. In this way he tries to hit vijay emotionally. But, later chinna is murdered and Vijay is trapped into this murder case.
Vijay is sent to jail, where he realizes the truth. He joins satyam after being released and pretends to work for him. In the end, vijay manages to gather evidences of all dark secrets of satyam and gets him arrested.