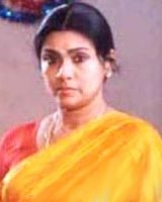 Sujatha was a popular South Indian actress in earlier days who has performed in Tamil, Malayalam, Telugu and Hindi language films, often with Kamal Haasan. Known for restraint and subtlety in portrayal of varied emotions, Sujatha made debute to film industry in 1967 of Malayalam movie "Thabaswini", Sujatha was introduced to the Tamil film industry by Director K. Balachander as the protagonist in "Aval Oru Thodarkathai".

Suthradarulu, Pandanti Jeevitham, Prema Tharangalu, Vamshagouravam, Bebbuli, Sandhya, Aasha Jyothi, Guru Sishyulu, Sarkas Ramudu, Guppedu , Mayadari Krishnudu were a few films in which she delivered best performances. She is counted as one of the finest actors in the South Indian cinema industry. Like Smita Patil in Hindi, Sujatha was known to act in films that potrayed women empowerment.

In 1997 She got Nandi award for best supporting role in the movie Pelli and also She was an award winning actress in all the languages she performed and was conferred "Kalaimamani" by Tamilnadu government.

Sujatha spent her childhood in Sri Lanka, where she would actively participate in school plays, and later moved to Kerala when she was about 14. She acted in "Ernakulam Junction", a Malayalam film, and soon drew the attention of Balachander. She is survived by husband Jayakar, son Sajid and daughter Divya.

She died of a cardiac arrest on 6 April 2011 after undergoing treatment for a heart ailment at Chennai.