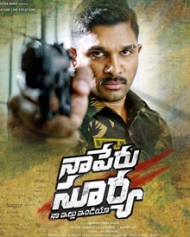 Surya (Allu Arjun) is a committed and dynamic army personnel whose main drawback is his short-tempered nature. His only objective is to guard his nation but his downside acts lets him down quite often.

Surya gets into a brawl with a certain minister's son at a pub in one instance while he...