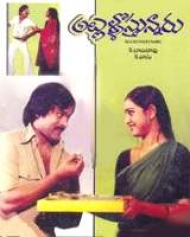 Comedy Romance
Release Date : 11 Feb 1984
Cast : Chiranjeevi, Geetha
Director : K.Vasu
Synopsis
Allullostunnaru is comedy family based movie in which, Prabhakar Reddy as a rich affluent person with 2 daughters Geeta and Sulakshana.
He fixes their marriages with his friend’s sons and they plan to arrive at his house to meet his daughters.
But two other imposters (Chiranjeevi and Chandramohan) arrive portraying themselves as would be son-in-laws and play drama at his house.
Both girls fall in love with these men and by the time their father realises the true identity of imposters he gets into trouble.
Heros Chiru and Chandramohan play their game and save him from trouble and marry his daughters in the end.