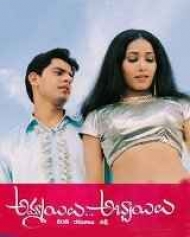 Comedy Romance
Release Date : 29 Jan 2003
Cast : Mohit, Vijay Sai
Director : Ravi Babu
Synopsis
Ammayilu Abbayilu  is an Comedy romance based movie. In which,  Manju , Anju , Ranjani , Prasad and Sanjay are five teens living in a colony. Prasad is a short guy and has lots of inferiority complex. Anju and Manju have hots for Sanjay. Prasad is in love with Anju. Ranjani is in love with Prasad. Sanjay does not believe in love and hence he doesn't really care to respond to either Anju or Manju.

There is a guy called Rakesh (Sonu Sood) who is brother-in-law of Manju. Their parents set off marriage to Rakesh and Manju. The rest of the story is about all ends well.