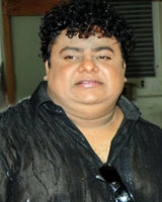 Chakradhar Gilla (known as Chakri) was an Indian music composer and singer. He worked for Tollywood films. He won the Filmfare Award for Best Male Playback Singer – Telugu for the film Satyam (2003).

Chakri was born in Mahabubabad, Warangal district, Telangana. He has one brother and three sisters.

He started his career with private music albums and stepped into Tollywood with Puri Jagannadh’s Bachi. Chakri went on to compose several hit albums for numerous successful films thereafter. In an illustrious career that spanned over 85 films, Chakri churned out many hit albums and even won the prestigious Filmfare and Nandi awards. He also introduced many lyricists, singers and technicians to Tollywood.

Chakri composed music for around 85 movies. He started his career as a music director with the movie Bachi directed by Puri Jagannadh. As a composer, he introduced many new talents (singers and lyricists). He won best singer award for Sathyam in the Tollywood Filmfare Awards and a Nandi Award for Simha.

Chakri was married to Sravani from Godavarikhani.

Chakradhar Gilla, better known as Chakri, died at the Apollo Hospital in Hyderabad on December 15th, 2014.