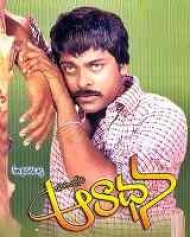 Aaradhana is story about an illiterate Puliraju (Chiranjeevi), who is a small time rowdy in a small town. He meets (Suhasini), who arrives in that town as a school teacher. Suhasini slaps and accuses him for ill-treating his mother. Puliraju, instead of taking revenge on her, gets attracted towards her and manages to join as her student.

Over a period of time, Pulitsju...