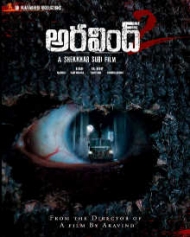 Aravind 2 is a suspense thriller, which has been made on par with Hollywood style. Srinivas Avasarala's performance is that main attraction in the film. Sekhar's wonderful screenplay, Vijay Kurakula's background score, Rajendrababu's picturisation, Venkata Naga's thrills and Venkatesh's art direction are other highlights of the movie.

The biggest drawback of the film is that it lacks that much need sense of horror or suspense and also it has abundance of illogical scenes. Sekhar Suri himself has written story and screenplay for the film Aravind 2, which is all about a film director, who sets out to shoot a movie in the Dandeli forest, where he faces some unexpected situations.