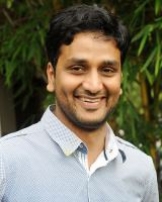 Srinivas Avasarala is an Indian film director and music director, screenwriter, dialogue writer, actor and television presenter known for his works in the Telugu cinema.

Srinivas holds a screenwriting diploma from the University of California, Los Angeles and he has taken acting classes for a year at Lee Strasberg Theatre and Film Institute, New York City. He did theatre in New York and then worked as an assistant director for a film called Blind Ambition.

He made his acting debut with the film Ashta Chamma, an adaptation of Oscar Wilde's The Importance of Being Earnest. His portrayal of Anand, Algernon in the play, received wide critical acclaim. He made his directorial debut with the Telugu romantic-comedy, Oohalu Gusagusalade. This adaptation of Cyranno De Begerac was one of the biggest hits of 2014 in Telugu films.

He also essayed the role of Uday Bhaskar in the film which earned him South Indian International Movie Award for Best Supporting Actor. He has essayed character actor roles in works such as Pilla Zamindar, Anthakamundhu Aatharvaatha, and Kanche, which won the National Film Award for Best Feature Film in Telugu for that year.