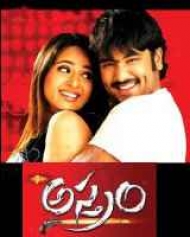 Crime
Release Date : 23 Jun 2006
Cast : Manchu Vishnu, Anushka Shetty
Director : Suresh Krishna
Synopsis
Astram is such a poor imitation of Sarfarosh that when you watch it you are constantly reminded of sarfarosh.The story is about Siddharth (Vishnu) who becomes an IPS man after terrorists lay low his dad. Siddharth is on a mission to finish off the ultras. There is Anusha (Anushka) and KV (Jackie Shroff) in his life. The former is his ladylove, the latter, a singer, is a kind of idol for Siddharth. he policeman’s efforts to unravel the terrorist network picks up momentum with him nailing Mirchi Malliah. The unspooling of the links lead up to KV, and the rest is how Siddharth deals with the situation. If Sarfarosh had a gritty and humane touch all through, Asthram misses them completely and instead comes across as just a potboiler.