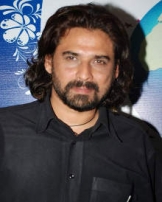 Mukul Dev is an Indian actor known for his Hindi films and TV serials. He is the son of a former police commissioner of Delhi and was born in a Khatri Punjabi family.

He is the brother of actor-model Rahul Dev. He attended St. Columba's School, Delhi, completing his I.S.C. Examinations (Class 12) in 1988.

Mukul Dev made his acting debut on TV through a serial Mumkin playing the role of Vijay Pandey in 1996. He got his break in films through Dastak as ACP Rohit Malhotra.