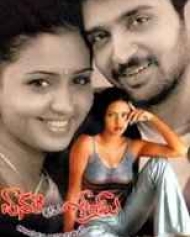 Romance
Release Date : 11 Sep 2003
Cast : Rohit, Gajala
Director : Anji
Synopsis
Janaki Weds Sriram is an Romance based movie. In which, Sreeram & Janaki are brother-in-law and sister-in-law. They like each other since childhood. But they were separated at an age of 8 because of a quarrel in that joint family. Janaki remains in Rajahmundry as Sreeram's family shifts to Hyderabad. But Janaki and Sreeram still love each other but never tries to trace each other out because they give respect to their elder's decision and stick to the promise they have given to their parents.Sreeram has a very close friend called Anjali (Rekha).
The rest of the story is all about how Anjali helps Sreeram out in finding Janaki.