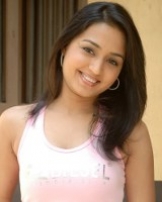 Gajala is an Indian film actress, who has appeared in Tamil, Malayalam and Telugu films. She has worked with actors like Dileep, Arjun Sarja and Jr. NTR.

She was launched in films in 2001-2002 in Telugu Films and later in Tamil and Malayalam Films. She was occasionally confused with Tamil Actress Sneha for the fact that both of them came to India from the Gulf - Sneha from Qatar, Doha and Gajala from Kuwait.

She lived in Muscat before her entry into the film industry.

She studied in Vidhyanidhi school in Juhu. She is married to Faisal Raza Khan since 2016.