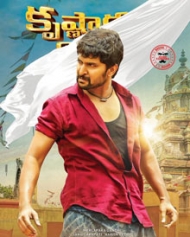 The movie runs in two different places with Arjun Jayaprakash (Nani) introduced as a rockstar in Prague and Krishna (Nani) as a village simpleton, hailing from Chittor. The plot shuffles between Arjun & Krishna where Arjun, a Casanova, constantly tries to woo Subbalakshmi (Anupama Parameswaran) while Krishna is in quest of finding an ideal girl for marriage and he happens to meet Riya (Rukshar Dhillon).

A young girl gets abducted in Hyderabad and that forms the serious side of the plot assuring of a woman trafficking subject. How are the lead characters involved with the crux of trafficking? What are the issues encountered by them?

Krishnarjuna Yudham movie is all set to release on April 12th, 2018.