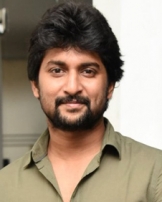 Nani is an Indian film actor, producer, media personality, and television presenter known for his work in Telugu cinema. He worked as an assistant director with Seenu Vylta and Bapu Garu before auditioning for the main lead role in "Ashta Chamma." Nani worked as a radio jockey with World Space Radio and was quite popular as "Non-Stop Nani."

Naveen Babu  Ghanta popurly known as Nani born on Feburary 24, 1984 in Hyderabad, Andhra Pradesh to Rambabu Ghanta  and Vijayalakshmi Ghanta. Nani was born and brought up in Hyderabad. He did his schooling at St. Alphonsus, Hyderabad, and intermediate at Narayana, SR Nagar.

He graduated from Wesley’s. It was during his undergraduate days that he got addicted to movies. There is a lot of Maniratnam’s influence on him. It is said that he watched the film Dalapathy an innumerable number of times.

He used to analyze films deeply, and his friends used to watch them just for the sake of entertainment. He wanted to become a director. Producer Anil, who is a distant relative of his, was producing Radha Gopalam with Bapu at that time. He joined Bapu as a clap director for that movie. He learned a lot from him. After that, he worked on films like Allari Bullodu, Dhee, and Asthram, and he starred in a lot more successful films.