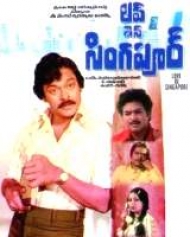 U | Action Drama
Release Date : 29 Sep 1980
Cast : Chiranjeevi, Ranganath
Director : Anjaneyulu
Synopsis
Love in Singapore is action romance based movie in which, Chiranjeevi (suresh) acted as the brother of Ranganath who is the main hero of the film. chiru’s father (P J Sharma) is a police officer and one day he catches a criminal ( om prakash) and sends him to jail.
chiru and ranganath were small boys at that time. One night chiru quarrles with his brother over a silly issue and when his father beats him ,he runs away from house in anger. Same night the villain cames to chiru’s house and kills his father in revenge.
Ranganath becomes a CBI officer and on the order of Indian government he goes to singapore to catch the mafia don who operates from singapore. There he is rescued by chiru from villain’s hench men and knows that chiru is his brother.
Chiru...