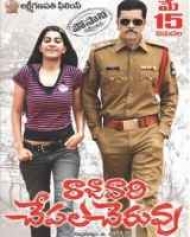 Posani Krishna Murali starring as police officer who would cross his power limits and loose the job but still media will support him in opposing the irregularities. Then where is the coincidence between Rajavari Chepala Cheruvu, Police Officer and Chief Minister. Police officer having met CM only Chepala Cheruvu story starts. How, I taught a lesson to them with the help of media, by running a fish breeding tank.