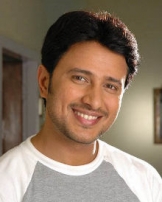 Raja was born in Vizag to a British mother and a Brahmin father. In 1983, his mother died of uterine cancer and in 1989, his father died of cardiac arrest.

Raja studied at the St. Andrews High School, Saidabad (New SBH Colony) and finished his SSC in 1993. He has two sisters called Vijaya/Victory (elder) and Padmini (younger). Padmini is married and used to live in Akkayyapalem.

Even before Anand released, he played a small role in Mahesh Babu's Arjun, which made him noticeable. Immediately after Anand, he acted in another hit film Aa Naluguru, in which he played the son of comedy king of Telugu Cinema, Rajendra Prasad. Raja delivered another big hit Vennela in 2005, which was mostly filmed in the USA. Since then, he has been getting offers for many films.