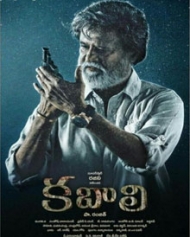 Santhosh Narayanan to compose music and Murali J to handle the Cinematography. Editing by Praveel KL.

Rajinikanth spends 25 years of his life in jail, when he returns, he is in for a surprise, which is gradually revealed to the audience. Why was he locked up in a Malaysian jail for such a long period of time is shown in the flashback.

The rest of the film deals with what Rajini does to get back his lost life and how he achieves his prime task, for which he was jailed all these while.

Director Pa Ranjith reveals the character of Kabali movie. Kabali is a self confident, angry man. But he doesn't talk punch dialogues. He talks only thoughtful dialogues which will touch your heart. In Kabali Rajini Superstar has given a reality performance.