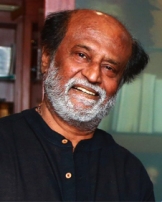 
Rajinikanth (aka Superstar Rajinikanth) is one of the most influential and bankable movie stars in Indian cinema. Rajinikanth's mass popularity and appeal are largely drawn from his mannerisms and stylized delivery of dialogue. He received India's third-highest honour, the Padma Bhushan, for his contribution to Indian cinema. Other than acting, Rajinikanth worked as a screenwriter, film producer, and also playback singer.

Rajinikanth was born as Shivaji Rao Gaekwad in a Marathi family in Karnataka, India. His ancestors are from the village of NachiKuppam in Krishnagiri district, Tamil Nadu. He was the fourth child of his parents, Jijabai and Ramojirao Gaekwad, a police constable.

He lost his mother at the age of eight. He did his schooling at the Acharya Paathshala in Basavanagudi, Bangalore, and then at the Vivekananda Balaka Sangha.

He married Latha Parthasarathy, sister of actor Y. G. Mahendran's wife, on February 26, 1981, at the age of 31 in Tirupati, Andhra Pradesh, and they have two daughters named Aishwarya Rajinikanth and Soundarya Rajinikanth.

He joined the Madras Film Institute in 1973 with the help of his friend Raj Bahadur, a fellow bus driver, and completed a basic course in acting. In the film institute, he was helped by his vice principal, A. Prabhakaran.

Rajinikanth has acted in a total of 190 movies, which include Tamil, Kannada, Telugu, Malayalam, Hindi, English, and Bengali films. Rajinikanth made a foray into Bollywood with Andha Kanoon but did not make as much of an impact as he had in the south.

He still appeared in a few films in Hindi, such as Chaalbaaz with Sridevi, Uttar Dakshan, Geraftaar, and Hum. He made his Hollywood debut with the movie Bloodstone in 1988, which was released to much fanfare in India at the time of its release. However, the movie failed in the United States.

Rajinikanth's first film was in Tamil cinema, where he was initially cast in supporting roles, debuting as a cancer patient in Apoorva Raagangal in 1975. The film was directed by K. Balachander, who is constantly referred to by Rajinikanth as his "guru" or "mentor".

The following year, Rajinikanth acted in his first Kannada film, Katha Sangama, directed by Puttanna Kanagal. Though Rajinikanth refers to director K. Balachander as his guru or mentor, it was director S. P. Muthuraman who actually revamped Rajinikanth’s image entirely.