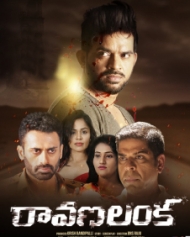 Ravana Lanka is a action crime thriller movie directed by BNS Raju. The movie casts Krish and Ashmitha are in the lead roles along with Murali Sharma, Devgill, Racha Ravi and many others are seen in supporting roles. The Music composed by Ujjal and background music scored by Satya kashyap while cinematography done by Hazarathaiah Shaik and it is edited by Vinod Advay. The film is produced by Krish Bandipally under K Series Movie Factory banner.